There are so many animals out there in need of good homes.Click on any link below and maybe you will find your new best friend and save a life in the process.

MY THANKS TO ALL THE GOOD PEOPLE THAT DEDICATE THEIR TIME AND ENERGY TO THE CARE  AND RESCUE OF ANIMALS. 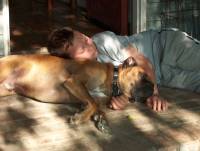 In January of 2000 we went out to the Boxer Rescue kennel to spend the morning walking some of the dogs. Ursula (knowing a sucker when she sees one) brought out this very skinny, sick boy. He had just been rescued and was in such bad shape and the stress of the kennel was not helping. He weighed 45 pounds, was covered in Mange and couldn’t keep anything down. I offered to take him home and try to make him well or at the very least make his last few days comfortable.  All my friends were sure he was going to die. I was sure he that he wouldn’t.  HE DIDN’T!!!!! Today that boy is a 95 pound, drooling, goof ball.  He thanked us in the most wonderful way. One summer’s night we were watching TV in the back of our house with the dogs at our feet.  Suddenly Joe got up and ran into the living room barking like crazy. I finally got up to see what all the commotion was and found that Joe had cornered some man in my living room. The guy was terrified. I hate to think of how the story might have ended if we hadn’t had Joe.

UPDATE: Joe was lost to us in 2007 and is greatly missed. 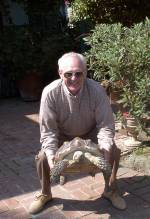 Yoko is a Sulcata Tortoise I adopted Yoko and her mate John, two years ago from the good people at American Tortoise Rescue. The Sulcata Tortoise is the the third largest species of tortoise in the world, weighing over 200 pounds or more, and attaining this size in a very short period of time. Adult female sulcatas can easily produce 90 eggs per year. These animals are NOT FOR EVERYONE!!!! . I love my torties but they are a handful and destructive and HUGE. Before you decide on a Sulcata do your homework and know what you are getting yourself into, then if you think you have a place for one in your home talk to Susan Tellem and Marshall Thompson at American Tortoise Rescue. 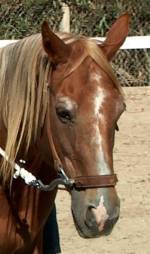 Shiva is an Appaloosa and Shelby is  a Quarter Horse. Shelby spent the early part of her life on the Rodeo circuit and was the Arizona State Champion Barrel Racer.  When Shelby could no longer race she was put out to pasture and left to die. A kind-hearted woman rescued a very skinny and unhealthy Shelby and now she belongs to Alexandra.  Shelby is doing great under Alexandra’s care.

When you take the chance and adopt an animal often they come with problems. Shiva came with her fair share.  Her previous owner was a young girl that was afraid of her and because of this rarely rode her. Shiva spent most of her time in her small stall, when she was ridden she was not ridden well. She was allowed to be the boss or ridden too hard. This caused Shiva to become barn-sour.
The terms barn-sour or gate-sour describe a horse that has become spoiled and reluctant to either leave the stable or enter a 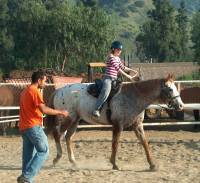 riding area. A horse that balks or refuses to go forward out of a stable yard is barn-sour. There will probably be some rearing involved if the rider insists.  When I first went to meet Shiva I must say her behavior scared me and I was reluctant to adopt her.  I was a novice rider and the sight of her bucking and rearing assured me that she was too much horse for me. I did know however, that she couldn’t be left where she was. My plan was to adopt her and have her retrained if that was possible. Then if she was still too much for me, I would simply find her a good home with a more experienced rider.  Enter Jerry Gaona owner of Saddle Up.  Jerry has worked with Shiva and I for the past 3 months and the results have been amazing. Even Alexandra who swore, when she first met Shiva, that she would never ride her is taking lessons on her.

Shiva and I, with Jerry’s guidance and assurance, are doing much better.  Starting with a difficult horse has actually helped make me a better rider.

Talk about coming a long way.  Alexandra now rides Shiva with The Blue Shadows Drill Team and volunteers with The Willie Ross Foundation 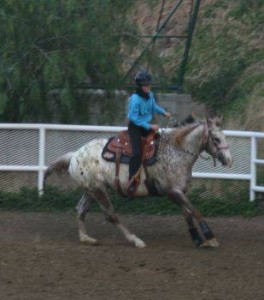 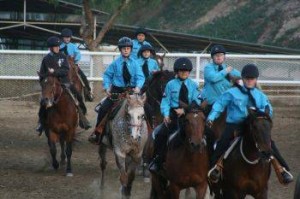 So that they may live the remainder of their lives in safety and dignity.

Smudge is a Pit Bull and a lover boy. Smudge was found wandering the streets when he was about 9 months old and taken in and cared for by the people at Camp Happy Dog. Smudge now resides in a loving home with Luigi (a wee Terrier), Lola (a pit bull pup) and two cats, Roxy and Milo.

About the Pit Bull 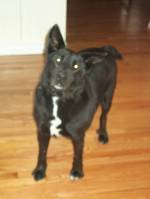 Christmas of 2004 I was leaving Book Star in Studio City, the last thing on my mind was getting another animal. Right outside the door were some volunteers from the EAST VALLEY ANIMAL SHELTERwith about  six homeless dogs. One of these dogs was Chico-Stanley a sweet boy  about ten years old who had been turned in by his owners (really nice).  Chico had spent the past 14 days in the shelter and I couldn’t stand the thought of him having to go back.  Few people will adopt older dogs and so Chico-Stanley’s future didn’t look  bright. While I was filling out the forms to take Chico home a very scared little golden dog huddled under the table by my legs.  The volunteer told me that Sophie had been dropped off that very morning by her owners . She was so scared she was shaking. Before I knew it I was filling out forms to take Sophie home too. Sophie must have had it pretty hard before she came to me. She is afraid of everything. The first couple of weeks she hid

under a table and only got up to eat, drink and go outside when the light were off and nothing else in house was stirring. She flinched if you went to pet her. Although she is still a little skittish  she now sleeps beside me and  follows me around the house. Everyday she heals a little more. As it turned out Chico was very sick and Christmas night I had to take him to the emergency animal hospital. Chico spent the next 2 weeks in the hospital fighting off a very aggressive bout of pneumonia. He is feeling great now and is a big lover, and I do mean BIG. Chico is 110 pounds of cuddle. 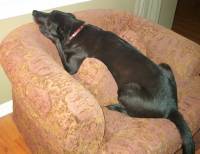 Stella is from the Brittany Foundation. What to say about Stella except that it was love at first site. Stella now spends her days  (see picture above) perched on the furniture, staring out the window in case another dog happens by our house. If they do she gives them what for.
UPDATE: Stella lost a battle with cancer in August of 2007. I miss her every day…no one makes me smile or brightens my days the way she did. 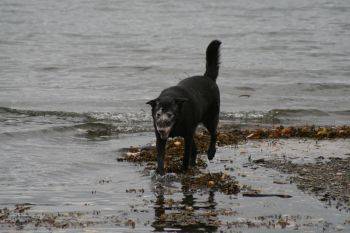